Back to ARTICLES Home Page

During the 1960s, both churches, St. John's and St. James, provided leadership and actively supported and raised money for the civil rights movement, supporting the Freedom Rides and Freedom Schools in the south and supporting the cause of school desegregation in Boston through the establishment of Freedom Schools in Boston and through working with the NAACP and others on the campaign for school integration and educational equity. 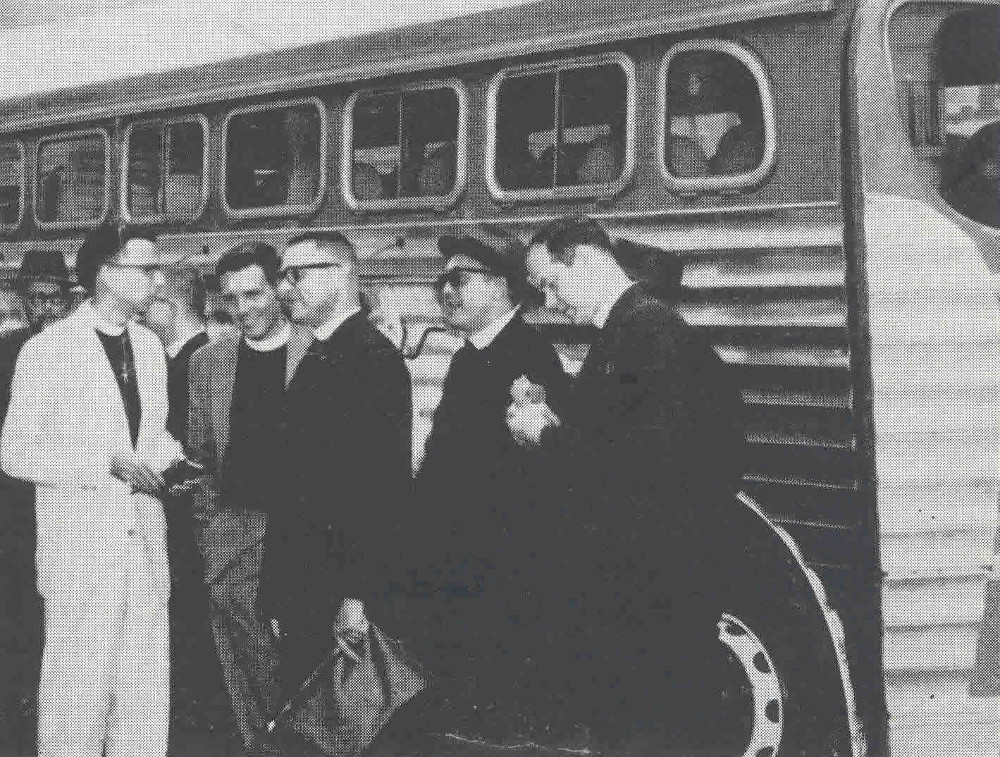 In the spirit of the "Freedom Rides" that were begun in May 1961, the Episcopal Society for Cultural and Racial Unity(ESCRU) announced a direct plan of action to combat racism and promote interracial harmony in the South. A Prayer Pilgrimage" was to be undertaken by a multiracial group of clergy traveling by bus.

These flyers, from the Northeastern University archives, announce the speakers for a forum on important social topics. In December 1961, the clergy of St. John's, Rev. Gilbert S. Avery, and the clergy of St. James, Rev. Cornelius Hastie and Rev. James Breeden, spoke about their experiences earlier that year in Mississippi.

From 1960 until 1965, Canon James Breeden was a member of the Episcopal Diocese as a deacon, priest and canon at St. James Church and St. Paul's Cathedral. He became an advisor to Bishop Anson Phelps Stokes in the area of civil rights.

In 1961, he participated in the Freedom Rides through the "Prayer Pilgrimage" and was arrested in Jackson, Mississippi (along with Rev. Avery and Rev. Hastie and others) for "action likely to cause a riot." (See photo on this page).

In 1963, Rev. Breeden, with Noel Day, a social worker at St. Mark's Social Center in Roxbury, founded a civil rights organization, Citizens for Human Rights (CFHR) and began by raising funds for the voter registration drives and Freedom Rides in the South, gathering over 10,000 for a demonstration on Boston Common and raising enough money to buy a voter registration bus for SCLC. From that start, CFHR became involved in Boston's school desegregation issues and initiated the "Stay out for Freedom" days in Boston protesting segregation and inequality in Boston Public Schools. Students were encouraged to stay out of school on a designated day, and, instead, to attend Freedom Schools that had been set up through churches and community organizations throughout the city. This work is profiled in several histories of the civil rights movement in Boston. 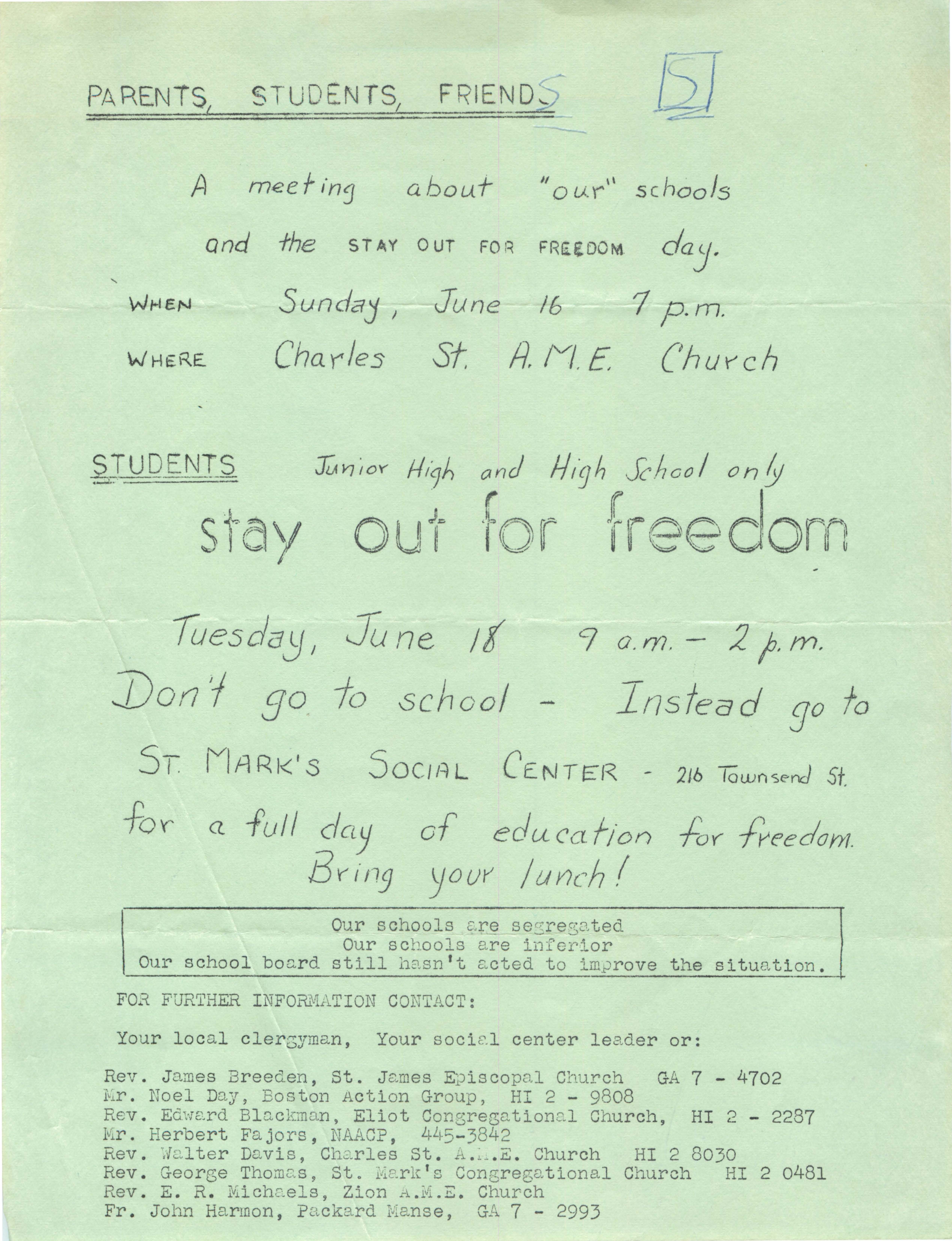 The WGBH Scholar Exhibit "Boston's 1960s Civil Rights Movement: A Look Back" (Audrea Jones Dunham) describes the work of the Citizens for Human Rights, and describes the Stay Out for Freedom days and the establishment of Freedom Schools in Boston.

African American children who overflowed a special one-day "Freedom School" in Boston walk to another meeting place accompanied by Rev. Cornelius Hastie on June 18, 1963. Special meetings were held after parents kept children from regular Boston public schools in protest against what they termed segregation in actuality if not by law. These children are on way from St. Mark's social center to St. Charles Church. (AP Photo)

During the 1960s, Fr. Hastie was active in the civil rights movement, traveling South to participate in the Mississippi Freedom Rides and Dr. Martin Luther King's march in Selma.

From the Boston Globe profile: As a seminarian, Father Hastie served at Roxbury's St. Johns Church. After ordination its sister church St. James called him as Rector. Many years later Father Hastie was recalled to the combined congregation of St. John St. James Church. He served over 20 years as Protestant chaplain at the Suffolk County House of Correction, and part-time in Charlestown. Through the interim years he listened and responded to the needs of concerned parents in his Roxbury neighborhood who wanted before and afterschool programs for their growing children. He was the founding director of the St. James Educational Center, with many programs morphing into a Headstart Center serving thousands of children and families over three decades.

From 1960 to 1966, the Reverend Gilbert S. Avery was Rector of St. John's Episcopal Church. Rev. Avery and his wife Laura Avery were deeply committed to social justice and civil rights work.

In 1961 Gil was arrested in Jackson, Mississippi at a Greyhound bus station, as part of an interracial group of clergy challenging segregation in interstate travel. He served five days in the Hinds County jail. He was later acquitted on appeal. He returned to Mississippi in 1964 as part of "Freedom Summer," a project to register black voters. A book about Freedom Summer notes that he taught in a Freedom School in Mississippi, in Sunflower County, noting that he brought lessons from Mississippi home to enrich his work.

In 1965 he participated in the March on Washington with Dr. Martin Luther King, and marched with Dr. King in Boston. At St. John's Church, Gil worked with the school desegregation movement for Boston public schools, and with the alternative Freedom Schools. During the Vietnam War he witnessed for peace, fasting at St. Paul's Cathedral, Boston.

In 1966 he was appointed the Director of the Episcopal City Mission, where he served until 1981, focusing on affordable housing and social justice issues. He later led an church mission agency in Philadelphia, and in 1991, he and his wife retired to Eugene, Oregon, where they continued active volunteer work. Rev. Avery died in 2015, and his wife Laura died in 2019.